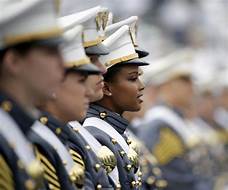 A Mother of Sheroes: An Army Wife’s Story of Raising Daughters Who Joined the Military.

Have you ever heard the phrase, “If you want to make God laugh, tell him YOUR plans?”  Well, Teesa definitely made God chuckle, as she planned out her future upon graduating from high school and entering college.  Teesa Albert (a pseudonym) went to college right after she completed her senior year of high school, with dreams of becoming an accountant once she obtained her college degree.  However, Teesa’s plan to work as an accountant changed, after she married her college sweetheart!  Although they were both college students, Mr. Albert (a pseudonym) enlisted into the military when they decided to start a family.   So, Teesa left college without graduating, and supported her husband’s military career, while taking classes in various locations.

The Alberts have been married for over 20 years, and Teesa still remains determined to earn her degree, as they continue to move wherever the Army takes them.   Just two more classes to go, and Teesa will be a college graduate and will still pursue a career in accounting–reminding us that it’s never too late to be what we could’ve been!

It’s no wonder that Teesa and her husband raised extremely driven children, who are accomplishing goals that very few people attain: Becoming future Army Officers (two out of three children are enrolled at West Point).  Black people in the United States are classified as “minorities,” and Black WOMEN enrolled at West Point are apart of an even smaller minority.  Women, regardless of ethnicity, weren’t even allowed to attend West Point until 1976!  Thankfully, times have changed and now Teesa has TWO daughters who attend the prestigious academy.

For the Alberts–again, a pseudonym–it didn’t matter that these young women saw their mother prolong obtaining her college degree.  No, it didn’t matter that their parents weren’t military Officers.   And no, it certainly doesn’t matter that their skin is the beautiful color of deep brown walnuts!  Their background is NOT a barrier, but only motivating factors!  These two future Army Officers lived with both their hero AND their SHEro, while growing up!  Because the “Albert” sisters have parents who continually encourage and cheer them on, the young ladies possess key elements to help them survive and succeed in a climate that might often feel unfamiliar.

The West Point Class of 2020 included 38 black women, the highest number since 1980, when women graduated for the first time (Army Sgt. 1st Class Josephine Pride/U.S. Military Academy).  Among the 1,017 cadets who graduated from West Point on Saturday, June 13, 2020–in a social distanced, no-audience ceremony with President Donald Trump as commencement speaker–was a record number of African American women. According to the Diversity and Inclusion Studies program at the prestigious Army academy, 38 Black women graduated with the class of 2020–the most in the school’s 218-year history.  Despite incremental progress, West Point remains mostly white and male: there were 230 women in the class of 2020, according to the Times, and 12% of graduates were African American; 9% Asian, 9% Hispanic, and less than 1% Native American  (https://www.vogue.com/article/record-number-african-american-female-graduates-west-point).

Taking all of these statistics into account, it’s beyond remarkable that siblings–female siblings…Black, female siblings–have already accomplished so much!  It’s a joy to see daughters admire their mother while growing up, and later grow into women that in-turn, inspire their mother–which is the case for the Albert family.  Teesa shared with me that, her daughters encourage her to do more “self-care” and to continue accomplishing her goals.

To her daughters, Teesa sends this message, “I am so incredibly proud of you!  You all said that it was your goal to attend West Point, and you did it! There isn’t anything or anybody that can stop you from being great!  You are destined to be successful!  Believe it and achieve it!  Be yourselves, because you are enough & worthy of all the blessings bestowed on you.  There are so many of us praying for your health, safety & success.  You got this Sweet Peas!  I love you both!”

Every daughter should be so blessed to be loved by their mother, like this!!!  Healthy, loving mother-daughter relationships are so important!  Teesa is only repeating a cycle–a functional cycle–that stems from the love and support that she also received from her own mother.  Still, Mrs. Albert understands that there’s isn’t a “one-size fit all” philosophy when it comes to parenting, but she does have some advice to offer military wives and mothers of military children:  Find YOUR own purpose, and try not to define the kind of mother or wife you should be, based on others.  Teesa stated also that, “Working gives me a purpose and a sense of accomplishment, outside of my house.  For me it’s an extension of my individuality, my personal goals and my dreams.  It helps me keep things in perspective to not lose myself in my marriage or as a mother.”  Although Mrs. Alberts sacrificed so much professionally, she believes that she’s still been blessed to achieve professional goals to a certain extent.  Teesa further explained that, “I love my family, but I also love interacting with people and problem solving. That is what working [employment] does for me.”

With so much drive and desire to stay busy, Teesa acknowledges that, “Maintaining family time, time for yourself, and quality time with your spouse are constant struggles.  The balancing act between family, work and self-care takes dedication to making a conscious choice to make it all happen. The choice that you will make it to an event for your child, regardless to what it going on at work. The choice that date-night will happen, even though we’re both tired from long days of work & kids.  The choice that I’m going to attend the virtual spa-day that my girlfriend.  Plan for family, kids and self!  Add it to your calendar!  On the other hand, be kind to yourself.  Things happen & sometimes plans change, especially for us military wives and mothers.  Don’t beat yourself up for missing an appointment.  Each day is another opportunity to balance all that is thrown at us.  Some days balance means a tilt in one direction or the other, and for you & your family, that is your balance.  Everybody’s balance will not be the same.  Prioritize for yourself, your family, and your job.”

In taking better care of yourself, you can take better care of your family.  Yes, your own personal/career goals may be delayed or altered, but the investment of time into your children may influence them to succeed in ways that could have only been possible, because of your presence!  And then, in the most ironic and unexpecting ways, your children may become your biggest cheerleaders!  The cycle of encouragement comes full circle, from parents to children, then from children to parents.  God might laugh when we tell Him our plans, but when everything works out, it’s us who are smiling more than we could have possibly imagined.

A Mother of Sheroes: An Army Wife’s Story of Raising Daughters Who Joined the Military. was last modified: August 14th, 2020 by Jamilah
0 comment

To Work or Not to Work… Is that REALLY the Question?

Hi! I'm Jamilah! I've been a Navy wife since 2006, after earning my Masters in Marriage & Family Therapy from San Diego State University. After relocating to other areas, I longed for a sense of community and resources--hence, I created Black Military wives! The goal of Black Military Wives (B.M.W.) is to create relationships between women who share similar cultural and family experiences, in relation to the military. B.M.W. also has a Facebook Group, which was established in January, 2016. The group now has more than 8,000 members--even though it's a "secret" group! At the time of its creations, there wasn't any other worldwide "Black Military Wives..." anything! Now, there are so many resources available to our community! Together, we are making a remarkable difference in building friendships and sharing resources between sisters all over the world, and I'm so thankful to be apart of this amazing sisterhood.