As I prepared to celebrate my ten year wedding anniversary this weekend, I excitedly got on the internet to look up some mushy love quotes for military couples. I planned on sharing the images on Facebook, as a tribute to my husband this weekend. Yep–I’m an annoying, hopeless romantic who goes over & beyond to show her man how much he’s loved and appreciated! So, I spent a couple of hours on Pinterest and Google, looking at some of the most romantic photos and reading the most heartfelt quotes. There’s love, and then there’s the military-sacrifice-it-all kind of love. We have the latter, of course! I couldn’t wait to post something on my personal Facebook page about the resilience found within military marriages, and how they truly withstand the test of time–literally.

But, as I looked through Pinterest and Google, I became annoyed.  I couldn’t quite figure out the source of my frustration. With each viewing of a meme, I became more irritated. The words were nice and the pictures were creative, so what was my issue? It finally occurred to me: There are little-to-NONE images of Black Military couples online!!!! Of course, there are Black military couples out there–obviously, but we certainly don’t have many memes in our honor or sweet quotes written above our photos. “We exist!” I wanted to scream! Our love exists! We miss our spouses just like you do! We look forward to their returns. We hate it when they deploy!!! We appreciate the sacrifices they make for our country, even if it means we have to hold down the fort for several months, alone. Black women, yes Black women, are enamored with their service-members just like any other group of women! And guess what? We get all warm and fuzzy inside too, when we see them in their uniforms! What a beautiful sight…I suppose that’s why I felt a void when that sight, that magnificent image of a Black military couple, didn’t appear in my search results.

The absence of Black military couples displaying their love online, speaks volumes–even though many of us might not hear the message. Healthy marriages are a big deal in the military community, but it’s especially extraordinary in the BLACK military community. All military wives are familiar with leaving behind loved ones as we relocate every few years (or less). We have to find ways to adjust, get acclimated to new environments/cultures, help our children cope with social/emotional changes beyond their control, and we miss our spouses terribly when they deploy.  We ALL experience these feelings, despite our ethnic background. However, a Black military couple has other added challenges too: While our spouses serve and protect this great nation, many of us must prepare our children for the difficult social injustices of the world; educating them on how to exercise their freedom as Black American citizens, while our spouses preserve freedom for all Americans.

It’s also important to note that for some of us wives, we are the firsts to hold the title of WIFE within our immediate families. I’ll be completely transparent here: My mother was not married to my father. This was not uncommon among my friends while growing up, either. In fact, I took a poll in the Facebook group “Black Military Wives,” asking whether they were raised in a two parent (married) household for 10 or more years? Of the members who answered thus far, 47% reported “No,” while 53% answered “Yes.” Frankly, I wasn’t surprised that almost half of the respondents grew up without both parents–MARRIED parents–in the home. And yet, here we are: Black Military Wives–WIVES! Many of us are thriving in our marriages without a military OR civilian blueprint for how to keep our families together, and we are doing it very well! Black military love, like all military love, deserves to be recognized on all platforms for its resilience, depth and sincerity because it definitely exists! And, I will do what I can to make sure that our love is seen! 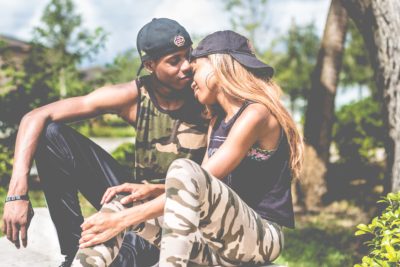