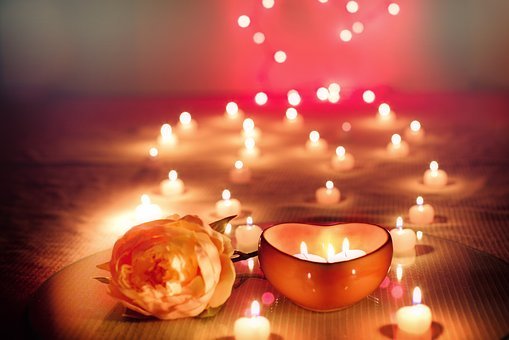 written by Jamilah February 13, 2017
Earlier in the relationship, you were probably more risky.  Boundless intimacy on the patio while the neighbors in the adjacent apartment building could look on–if they just happened to walk outside–made your heart race.   Making love in the Caribbean’s clear waters as others laughed and splashed around–completely oblivious of the pure bliss that transpired only 50ft away–felt surreal.  And, how could you ever forget all of the times that he washed your hair, while shampoo bubbles fell down your shoulders? Well, you’re not suffering from amnesia–you haven’t forgotten anything.  Your vivid memory of all of those passionate escapades are resurfacing, as you try to plan something special for your soulmate this year–it’s crunch time!  However, you’ve already bought him every gadget that a guy could want and you’ve already created every romantic scene that your imagination could conjure up–the kind of ambiance that usually only women could appreciate, anyway!  Lol.  To top it all off, cash might be low right now.  Flying to an exotic island is out of the question, and who do you know well enough that could watch the kids in Japan or San Diego, during your romantic hiatus, anyway?!
Like many women, you too might be adamant about keeping the flame alive, determined to never let it blow out.  Here’s the problem: Some of us act as if our union was only given one candle–just one flame.  In order to prevent our love from ending, that one flame must burn for all of eternity.  Well, we’re wrong!  As the years go by, we actually have more ways to ignite the fire of romance–we have several flames, and countless ways to make them burn!
There are different stages (flames) within relationships.  For many of us, we go through stages like courting, marriage, and parenthood (just to name a few).  Each new level, alters how romance is displayed.  Flowers?  Hmm.  I love tulips and calla lilies, but I get more excited when he surprises me with my favorite milkshake (like how he spontaneously made one for me last night).  Massages with scented oils or lotions?  Sounds good, but I’m also in paradise every night that he puts the baby to sleep, and I get an hour of mindless entertainment while watching TV or scrolling through my Newsfeed.
No, the romance didn’t die with marriage or becoming parents.  It’s just that the romance isn’t dressed up in lingerie three times a week, but instead it’s dressed in the priceless attire of “spontaneous gestures.”  A gentle slap on the butt, because he loves those sweatpants, makes you smile immediately.  Yes, he still finds you attractive, even in sweats and without wearing any makeup!  Oh, and how about, “Honey, I’ll give the kids their baths. You need to relax!” Or, “Go out with your friends.  I’ll take the children to the zoo.”  Those statements are music to my ears, personally!  The passion is still there, no doubt.  The flame, I mean flames, are still flickering too!  It’s just that the romance has been revised, and new revisions will come with each year of marriage.  As Valentine’s Day approaches, here are some things that you can also do on ANY DAY of the year!
**10 Inexpensive (Revised) Romantic Ideas**:
1. Wake up 30 mins before your spouse usually awakens…and then, WAKE him up early.  I won’t be too specific, but we’re all adults here 😉.  Hey, you can sacrifice 30 mins of sleep every now & then! Lol.
2. Make a list, stating: “For our 11th  Valentine’s Day together, here are 11 reasons why I love you” (for example).
3. If you don’t do it already, put a sweet note in his lunchbox or pocket of his uniform.  Remind him to check it.
4. Tape a sweet note onto the steeringwheel of his car.
5. Put something “seductive” into his car, the night before, with an “I can’t wait until you come home” message.
6. Order a pizza and ask them to spell out “I Love You” in pepperoni.  My husband loved this! Lol.
7. Buy “Crush Soda” and put a post-it on there with, “I still have a CRUSH on you.”
8. Make sure that he wakes up/comes home to a clean house, if you don’t do that already.
9. If he isn’t on his phone, put yours down as well.  Give him your undivided attention, as much as possible–even if you’re being silent together–the silence can speak volumes!
10. Go to PINTEREST and search for more “Romantic DIY” ideas.
***And remember, try NOT to compare your marriage to anyone else’s relationship.  February 14th is a commercialized day to celebrate romance, but don’t forget to truly appreciate the “just-because-I-love-you” days, too.  Embrace the fact that he is no longer trying to simply seduce you.  You are no longer luring him in, hoping that it’s only you that he’ll want to marry one day.  He isn’t chasing you and you aren’t running.  Your feet are now securely planted in each others hearts, and it doesn’t get any more romantic than that!  Neither of you are probably asking the other, “What do you want for Valentine’s Day?” You aren’t rushing to Victoria’s Secret or sniffing the countless bottles of cologne on the counter at Macy’s.  Why aren’t you running in the Valentine’s Day rat-race?  Well, because the chase is over.  The race is done!  You’ve both already won…I’m not saying to “throw in the towel” when it comes to passion or gift-giving.  What I am saying is, don’t lose sight of YOUR GLUE! What makes you two stick together, doesn’t come with any receipts!  Enjoy the most priceless treasure of all–LOVE. May your flames continue to burn!
Romance, Revised was last modified: February 14th, 2017 by Jamilah
9 comments

Thank you very much!

Since I am deployed I think all of this makes me more eager to redeploy and keep the candle ignited. Wonderful Read!!

Thank you for you service, and for the feedback!

I love ❤️ this. I am a new military wife and this just gave me so many different ideas for my husband. Thank you and the article was very nice.

Thank you! Best wishes on your journey and never underestimate the importance of finding your tribe!

Hi! I'm Jamilah! I've been a Navy wife since 2006, after earning my Masters in Marriage & Family Therapy from San Diego State University. The goal of Black Military Wives (B.M.W.) is to create relationships between women who share similar cultural and family experiences, in relation to the military. B.M.W. also has a Facebook Group, which was established in January, 2016. The group now has more than 5,000 members! Together, we are making a remarkable difference in building friendships and sharing resources between sisters all over the world... and I'm so thankful to be apart of this amazing sisterhood.