There is so much diversity among the wives of service-members.  Yes, even among Black Military Wives (B.M.W.)!  We can be stationed at the same base, go to the same beauty salon, send our children to the same schools…and yet, we may differ in our beliefs regarding what’s best for our families.  There are some employed wives who resent the notion of being a housewife or a stay-at-home-mom (SAHM), and opt to work.  Likewise, there are some SAHMs who believe that the best way to be an involved, attentive mother is to be at home with their children. And, there are those of us who believe that all of us work extremely hard, whether we receive a paycheck or not. What an emotionally-fueled topic, right?! Many of us have stood in both pairs of shoes, and are empathetic to the unique experiences of every military family. We never know why someone is a SAHM or works outside of the home, but it doesn’t stop the judgment from occurring anyway.  Admittedly, before I had children, I was one of those women who judged mothers of older children for not being employed.  My claim was that I embraced having “my OWN identity,” “my OWN bank account,” and “my OWN credit cards.”  I always understood the “need” to be at home with younger children, but once the children became “school-aged,” I thought that women “should” work…Oh, how little did I know!  I flaunted my independence–I simply didn’t know any better. I remember how the song “Miss Independent” by Ne-Yo, was my anthem when we were stationed in Tampa, Fl. I’m singing it to myself right now, as a matter of fact!

Her favorite thing to say, don’t worry I got it
And everything she got best believe she bought it…

Yep, that was my anthem! I was proud–very proud! In fact, I would often talk to other spouses about how awesome the lyrics were. These lyrics are still pretty awesome, too! Every B.M.W. in my close circle could also relate to this song. We were all college educated, Black, INDEPENDENT women who just happened to marry military men, and now we were labeled as “Dependents” simply because our spouses were in the United States Armed Forces.  I frowned when I heard the term. However, with time, wisdom, maturity, and now having two children, my views changed drastically. It’s funny how my “frown” went through its own metamorphosis, and I now “smile” at the honor and privilege of being his DEPENDENT! In many ways, we were each other’s Dependents (and still are). After becoming pregnant with our first child, we decided that it would be best if I didn’t return to my job due to our upcoming PCS (Permanent Change of Station, although it’s not really permanent…). When our first daughter was eight months old, my husband deployed for almost 11 months. Away from family and friends, I PCSed without him from Florida to Virginia–that was an interesting drive with a baby! Living in another unfamiliar place, we decided that while he was gone that I would continue to be the sole caretaker of our daughter. He depended on me to take care of our home, the bills, and raising our children (we now have two), without his constant, physical presence.  As I continue to witness our daughters reach every milestone, we know that our decision works best for our family.

It wasn’t until I sat down to type these words, that I noticed the title of the song that was once my anthem is called “MISS Independent,” opposed to “MRS. Independent.” I wonder if, on a subconscious level, many Black women like myself embraced being “MISS Independent,” because culturally it was/is our familiar-place, even when we’re married? It isn’t always by choice that a B.M.W. is “Miss Independent,” but sometimes it’s the result of her “circumstances.” In order to have a certain desired lifestyle, some women feel a need to work. Some women LOVE to work! And, some work because historically and culturally we were caretakers of not only ourselves, but also of everyone else.  To be “provided for” is a struggle for many of us, and not all spouses want to be the sole financial providers for their families either nor can they be. There are so many variables that affect one’s decision to have a career.

I’ve discovered that while I no longer work outside of the home, I’m still quite independent. The irony, right? All alone, I INDEPENDENTLY gave birth without my husband, friends, family or any meds to ease the pain! I INDEPENDENTLY sold our house, survived a PCS without him, found a new home, unpacked our belongings, rearranged furniture, took our daughter to Dr. appointments, and I mentally survived the medical diagnoses given to our oldest child without having anyone there to comfort me. I endured many restless nights due to teething or illnesses, maintained our finances, wrote a children’s book, completed tedious paperwork for anything and everything, celebrated our daughter’s first birthday alone and I did all of these things as a Dependent–an Independent Dependent! I discovered that some stay-at-home-moms actually rarely “stay at home” and do nothing short of WORKING. Without a day off or a guaranteed lunch break everyday, we work around the clock. ALL  military wives work around the clock! I totally get it now: Being “independent” isn’t only about finances–it never has been! Being independent also involves having the ability to cope, survive and succeed in caring for your family emotionally & mentally, without having your life-partner physically at your side to contribute to the various needs of your household. As a military spouse, you will independently do things that many single-mothers also do, quite often. We are, at times, married women who walk in the shoes of single-mothers with the difference of being able to take off those shoes based on the path that we must walk.

The life of a military family is filled with inconsistencies and instabilities, in many ways. Every two or three years, most of us are moving to new places, our children must say goodbye to friends (again), and mommy/daddy might miss another Birthday, holiday, or fieldtrip due to deployments. This year, my husband will miss our youngest daughter’s 2nd Birthday and Thanksgiving. This is life…a military family’s life. As we transition from place to place, some of us must look for new careers, because there is no reciprocity for our professional licenses outside of certain States. Oh yes, the sacrifice is real. And, while many wives are willing to endure the changes in the name of love, we are mocked by some. I recently learned that according to the Urban dictionary, a woman whose spouse is in the military, may be referred to as a “Dependa, Dependapatomus, or Dependasaurus.” According to the definition, these women are generally NOT EDUCATED and have no goals or aspirations in life. They live their lives through their husband’s successes.” http://www.urbandictionary.com/define.php?term=Dependa. Reading this inspired me to take a poll within the Black Military Wives Facebook group. I wanted to know how true it was that military wives were “generally uneducated.” I wanted to know how true this would be for Black women? For the 544 women who responded, the results showed that 2%=High School Diploma/GED, 11%=Associate Degrees, 4%=Professional Certifications, 20%=Some College, 34%=Bachelors Degree, 28%=Masters, 1%=Doctorates. So, 98% of the spouses who particapeted in the survey, were actually educated past High School! In another poll, 92% of us had EQUAL or MORE EDUCATION than our spouses. Even as educated women, I discovered that 74% of Black Military Wives chose to be a SAHM at some point, while 26% always preferred employment. We can’t judge a woman’s work, by her paycheck or lack thereof! Employed or not, as a military spouse, YOU ARE WORKING! If a spouse doesn’t know how to survive “independently” without her partner, she may not be a “dependent” in the lifestyle for too long…Independence is required for every Dependent, as a military wife. 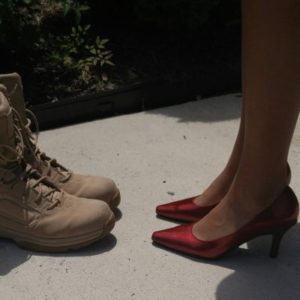