Up until eight short months ago, I did not know who my biological father was.  When I prayed as a teenager, I often referred to the Creator as “Daddy,” just so I could use the word.  Not all of the time–just usually when I wanted “fatherly” advice on something, like: “My boyfriend wants to take it to the next level.  How do I know if he really loves me, Daddy?”  Strange, huh?  Well, yes, calling God “Daddy” is a bit bizarre.  I just desperately wanted to say the word, “Daddy,” and let that word fall onto loving ears.   However, the ears that listened weren’t tangible–they were only spiritual, which was enough to console my young heart.  Without question, I’m not my FATHER’S only child, but He loves me like no other man has ever loved me–this I know, for sure!  I can’t “touch” or “see” my FATHER, but I FEEL him daily.

My mother told me the name of my Dad when I was little, and she also made him aware of my existence when she became pregnant.  But, I still grew up without his presence–in any way, shape or form.   My mother left Chicago when she was pregnant with me, and I was born in California.  Throughout the years and distance, I wondered: “Is he alive?  Does he know if I’m alive?  What does he look like?  Is he looking for me?  Do I have his lips?  If I visit Chicago and walk down the street, how would I know if I passed him?  Does he ever wonder where I am, if I’m safe,  or who I turned out to be?”  All of those questions were unanswered.  Still, I prayed to the Almighty that I would have responses to all of my queries.  Words cannot express my gratitude for finally receiving answers–just two months before reaching my 41st Birthday.   This is the first “Father’s Day” that I’ve ever awakened to, KNOWING that the other person who helped create me is alive and fully aware that I’m alive, too!  Anything else that I’ve learned about my paternity, have only been cherries on top of the sweet sundae that I’ve been served–after craving only the ice cream for 40-plus years!  Basically, I’ve gotten more than I asked for!!!

You see, I’m not the only person who doesn’t–I mean didn’t–know my Dad.  I recently read an article about “Amerasians.”  Amerasians are children who were fathered by American military-men, in various Asian countries or the Pacific Islands.  In an article by Emily Von Hoffman and Polarr, they reported that, “In the Philippines, more that 50,000 children have been fathered by military men–and left behind.  These children face stigma and alienation in their home countries–especially if their fathers are Black!”  One child was often locked in a closet when company came over, after his mother died when he was only two years old.  He was hidden in a closet, so that visitors wouldn’t see that he was obviously part Black.  Another child who the reporters interviewed, said: “I wish to one day visit the United States and give my father a hug.”   Many times, the children who are left questioning who their fathers are, don’t want much!  They don’t want money, new clothes, toys, or candy.  The children simply want to know the identity of their fathers!  The American servicemen who visited other countries and left behind children–possibly unknowingly–will forever be a mystery in the minds of their offspring.  My father was not in the military, but I too know what it’s like to wonder about the unknown.  The heavy load of uncertainty is a burden that no child should have to carry.

I must state, however, that most military men (in particular) are not leaving behind fatherless children in other countries!  Civilian men are also more likely to have their identity known to their children, too!  While there are children in the world who are unaware of the identity of their biological fathers, most children do grow up with active fathers in their lives or at least knowing the identity of their fathers–this includes Black children, contrary to popular belief.   I was actually the only person in my group of friends (as a child) who did NOT know who his/her father was.  In fact, as little as 9% of all children don’t know their fathers (https://theconversation.com/what-are-the-chances-that-your-dad-isnt-your-father-24802).

I want to acknowledge that so many military men, and civilian men too, provide for and love their children!  Fatherhood is not instinctual for some men–we hear the phrase “a mother’s instinct” much more than someone mentioning a “father’s  instinct.”  I believe that paternal bonding has to be a desired effort from men to be engaging parents!  Because there’s no biological alarm blaring loudly to make men want to provide, protect, and love their children, it really only boils down to that men’s character!

After finding out who my biological father was and talking to him over the phone, without question he acknowledged paternity–plus, a DNA test with another relative was done to help solidify any doubt.  During my moment of closure, I was so ecstatic that I finally KNEW my Dad and I shared this news with one of my dearest friends.  She listened and was happy for me!  Days later, her husband got a phone call–someone from his past duty station became pregnant (many years ago, prior to their marriage)!  20-plus years later, he found out that he had another daughter!  Immediately, he took on his role as FATHER!  He calls her, asks about her boyfriend, has planned to meet her in person, and without spending any physical time with her…he cares for her–deeply.  My friend was shocked by the news of her husband having another child, especially since they learned about this AFTER I shared my experience with her!  It is her belief that, “Yah (the Creator) prepared her” to have an open heart and mind, regarding the news toward her husband’s newfound daughter though my own testimony.  My friend knew that the young lady (just like myself) simply wanted to know who else was responsible for her existence.  My friend’s husband is a man of integrity–a man full of love!  He does more than quote Bible verses, he lives by them!

My friend shared this Bible verse with me on fatherhood as her family accepted the news, and I love every word of it: “He will turn the hearts of fathers to their children and the hearts of children to their fathers.”  Malachi 4:6.   By the will of God, my friend’s husband turned his heart to his other child, and welcomed her into his heart!  Not only does the Bible mention the role of fathers, but so does the Qur’an: “Fear Allah and treat your children (small or grown) fairly–with equal justice.”  Prophet Muhammad (PBUH).   A man who cares for his children, whether they were conceived in love or lust, is a virtuous person.  A man of honor.  A man who abides by the will of the Creator.

To the men who care for, love, protect, and provide for their children, I’m not only recognizing you, TODAY.  Everyday, is fatherhood for you–and everyday, I’m thankful that so many of our children will never have to ask the questions that I once pondered over.  Ladies, be thankful for the fathers in your lives–they have set excellent examples for what our daughters should expect and for who our young men should aim to emulate!

To my husband, thank you allowing me to witness what a daughter’s love from her father looks like–our girls are blessed to have you!

PrevPreviousIrreplaceable: Keeping My Gifts At Home Creates ‘Homemaker Magic’ In The Military.
NextTo Work or Not to Work… Is that REALLY the Question?Next 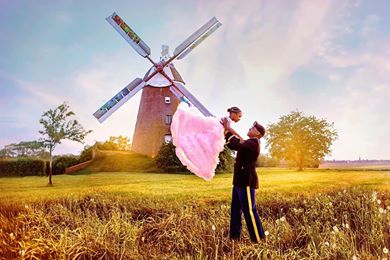